Frankenstein, Van Helsing and Arsene Lupin walk into a bar…

Winter is coming. We know this by the fact we've just spent the past week and a half bed-ridden with suspected whooping cough - and while the tests may have come back negative, the non-stop coughing, achy tiredness and high temperature were still very real. And while we were sick of the sight of soup after the first week, being stuck in bed all day does have its perks, particularly when you have a mountain of games to review, and little strength to do much else. And so it was that we turned to our latest otome game for comfort, a genre that's kind of like a choose-your-own-adventure book, in game form, only with a female protagonist and a romantic twist. And as it turned out, not only was Code: Realize - Guardian of Rebirth the perfect antidote during our week of feeling like death warmed up - it's a stonkingly good game to boot.

Set in an alternate history of 1853 London, Code: Realize has a decidedly steampunk-y feel to it - everything is steam powered, from the flying machines and Zeppelins that soar above the iron-covered city, to the false legs on dogs. At times, it feels like it could be straight out of a Jules Verne novel - and in fact, one of the lead bachelors, Impey Barbicane's namesake is a character from Mr Verne's 'From the Earth to the Moon', albeit with a heck of a lot of artistic licence thrown in. A self-proclaimed genius engineer, his light-hearted, down to earth nature, fondness for the ladies and willingness to be the butt of every joke makes Impey one of our favourite characters in the game. 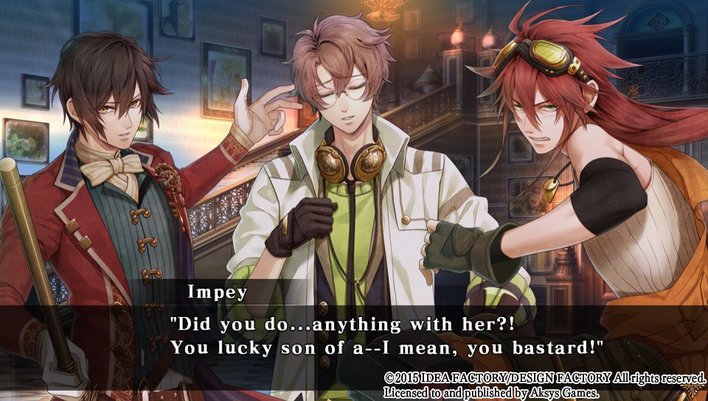 Impey's protective of the heroine in his own way...

In fact, this crazy take on literary figures of the past doesn't just stop there - pretty much every character in Code: Realize is a famous fictional character, stripped down and reworked into the silliest of anime archetypes. In terms of eligible bachelors, you have the gamut of personalities to choose from, from the shy and self-deprecating alchemist, Victor Frankenstein to the self-confident and optimistic master thief Arsene Lupin to the cold and calculated Van Helsing, the aforementioned goofy engineer, Impey, and the only genuine historical figure of the group, the mysterious French count, Saint-Germain.

Another nice touch, although a non-romanceable one, is that the game also features Lupin's fictional rival, the legendary detective Herlock Sholmes (as per Maurice LeBlanc's gentleman thief stories), who really gets under poor Lupin's skin whenever they have the misfortune to bump into each other. The way everyone bounces off each other is a particular highlight, with each character having their own unique personality, back story and endings that give you an excuse to play and replay Code: Realize a number of times to see everything.

Tying everything together is the tale of the protagonist and your character in the game, default name Cardia, the daughter of London's most famed scientist, Isaac Beckford - a man who's recently been reported missing. Not that your father's whereabouts makes much difference to you, as you've been shut up alone in a remote Welsh mansion for as long as you can remember, with orders never to leave its confines. The reason? Cardia has a dark secret that's caused the locals to tell tales of a monster who lives within - in place of her heart, she has a gem embedded in her chest keeping her alive, the side effect of which is a deadly poison that flows through her veins. Contact with her skin causes objects, people and animals to melt into a puddle on the floor, and she wants nothing more than to be able to feel someone's touch. One day, she's stolen away by Lupin and co, who all have their reasons for wanting to find her father, and her adventure begins. 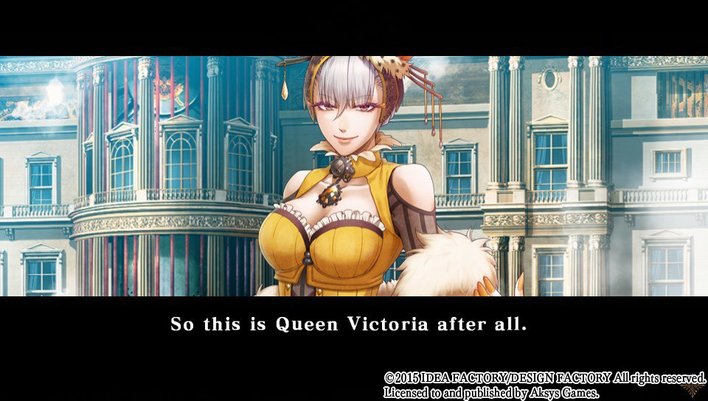 There's something that seems a bit different about Queen Vic, but we can't quite put our finger on it...

What follows is an outrageous and melodramatic adventure that uncovers all kinds of unexpected twists and turns, as you learn more about your companions, your past and a sinister plot with you at the centre, taking in train robberies, airship races and everything in between. A pretty lengthy tale, the story splits at various points depending on which conversation options you pick, with some leading you off down certain paths and others helping you grow closer to the guy of your choice, putting you on track for one of their character-specific endings. Like most games of this ilk, there isn't really a great deal to do besides sit back and read through the story, with only the occasional choice letting you steer the tale in a different direction - but, much like a good book, that's all it really needs.

About our only gripe is that there doesn't seem to be any way to check how your affection levels are doing with each of the men-folk, which can make it a bit awkward when you're trying for an elusive ending. Generally speaking you can kind of guess which options are going to get you closer to whom, like choosing to hang out with Impey will obviously increase your standing with him over Victor, but sometimes things are a little more obtuse. And sometimes its nice to be able to pick a few well-chosen options and watch the guy in question's affection soar, feeling like some super duper casanova-ette, if only for a second. 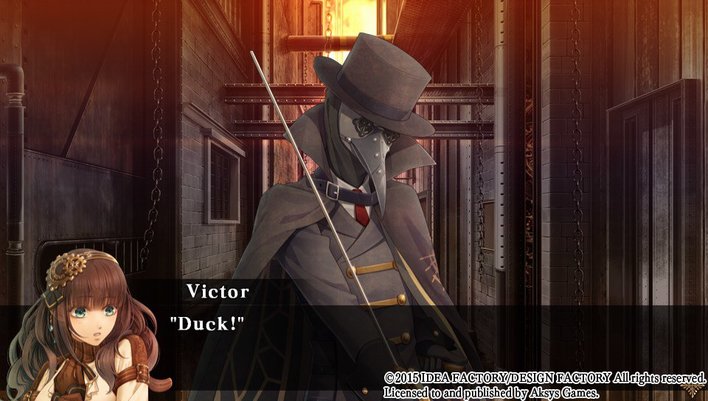 Not really... More a secret government agent tasked with tracking you down.

All in all, Code: Realize - Guardian of Rebirth is another winning romance-y visual novel that helps cement Idea Factory's Otomate division as the king (or should that be queen?) of otome games. Chock-a-block with likeable characters, humour and a solid story, all wrapped up in a unique steampunk setting, it's a must for fans of the genre - and anyone else who's even remotely curious. Whichever suitor you choose, you're in for a treat, but as far as we're concerned, it's Team Impey all the way!

Code: Awesome
Get Code: Realize - Guardian of Rebirth from

review
428: Shibuya Scramble Review - Shibuya's story is yours to tell

Accidentally destroy humanity, one upskirt at a time in this crazy visual novel

A tale of witches, eternal winters and secret women in the latest otome mystery from Aksys games

Mysterious murders, an occultish old town and one missing brother in this month's otome offering