Well, let that be a lesson to us. As has been said by many a parent, "don't judge a book by its cover" - but who knew that same adage applied to games, too? After all, Pode looks just like a simple puzzle-platformer, where a bright glowing raindrop with legs befriends a grumpy stone cube before happily leaping their way through levels. It's cute to a fault - and you'd expect the gameplay to be similar. Nuh-uh. In reality, Pode is one of those games that seems to pride itself on being frustrating, with a total lack of signposting like many other "indie" style games - as though if you get stuck, you're not the sort of person they'd want to be playing anyway.

OK. With that rant out of the way, let's look at what's actually here. Pode is a co-op puzzle game that revolves around two unnamed little blob-like characters, one of which seems to be a little sunbeam (named Glo), while the other is a grumpy rock (called Bulder). While it can be played on your own, switching between the characters using Triangle, it's a thousand times easier if you rope another player in to play with you, if only because one player can give the other a leg up to help them reach higher ground in the trickier platforming sections. 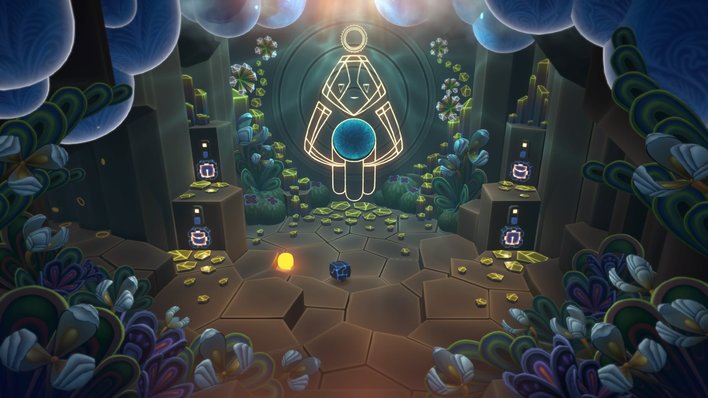 Moving the glowing blocks around will rotate the picture. All you need to do is make it line up (as we've done here)

Each of the two playable characters has their own special powers. Glo seems to weigh next to nothing, and as such he can float across gaps, while also having the ability to effectively set a glowing waypoint they can teleport themselves to at the touch of a button. This power's a bit tricky to explain, as on its own, it doesn't really do anything. What it's mostly used for is getting both players to the same point in the level. Imagine there's a high platform - something high enough that neither player can reach it on their own. If Glo jumps on the other's head for a leg up, they can then set up their waypoint, and jump back down, letting Bulder swallow them, before pressing the button to return to their waypoint, teleporting them both on to the higher ground. As you've probably guessed, Bulder's two main powers are, first, his ability to swallow the yellow one like some sort of walking cooker, and second, his weight, letting him walk under water against currents. On the other hand, both can interact with the levels by holding the right trigger, with Glo giving off a glow that brings plants to life, while Bulder seemingly magnetises itself, which causes rocks to grow and opens mussels (??).

Leave the glow behind, and you'll solve many of the game's puzzles.

Without much, if anything, in the way of a story, Pode is a game of simply making your way from one room to the next, solving the puzzles that lie within in order to continue your journey. However, one of the game's biggest problems is that these puzzles don't seem to have anything of a learning curve, instead jumping from the mind-bogglingly-obvious to the impossibly obscure in the space of a few minutes. Worse, sometimes even when you've managed to get to the end of the level, it often feels like you've kind of glitched it, and you aren't really doing it how you're meant to be doing it. You're never sure if it's just you who's not getting it, or just that there's not actually all that much puzzling to most of the game's puzzles.

That's not to say it's all bad, though - there's at least some reward to be had from figuring out how to make your way through the level, although with so few things you can do, most of the puzzles tend to have very similar solutions - and most revolve around getting Glo to, well, glow. In addition to making static plants grow, Glo can sometimes make leaves pop out that can be used as platforms - but if both characters have to get across, and the platform only appears when the yellow one's glowing, how do they both make it to the other side? The answer revolves around his waypoint - set the glowing waypoint up, and the glow will stay behind, letting you jump across, before holding a button to return the waypoint to you.

And there's another problem with Pode - the complete lack of any sort of explanations or prompts. With Glo's waypoints, pressing one button will return you to the waypoint, while another combination of buttons returns the waypoint to you. However, the game only tells you this once, and there's actually no way of double checking it if you need to remember later on - cue a lot of frustration, and accidentally teleporting you to the waypoint rather than the other way around. It makes even less sense when you actually do check the controls, only to realise that they seem to be inexplicably wrong, with the right trigger saying it activates some menu, and the left trigger saying it does something to do with levels/gallery, when in reality, neither does either.

And this is all so frustrating, because it's not like there aren't any nice puzzles in here. Some of the sections are genuinely kind of sweet - like where Bulder has to get on a giant leaf to cross a lake, because otherwise he'll sink to the bottom because he's so heavy, while Glo (who floats on water, because he weighs so little) has to use his light to push the leaf around. Yet for every really nice moment, there's at least a dozen frustrating ones that last a lot longer, and so, sadly, that's the feeling that Pode leaves you with. 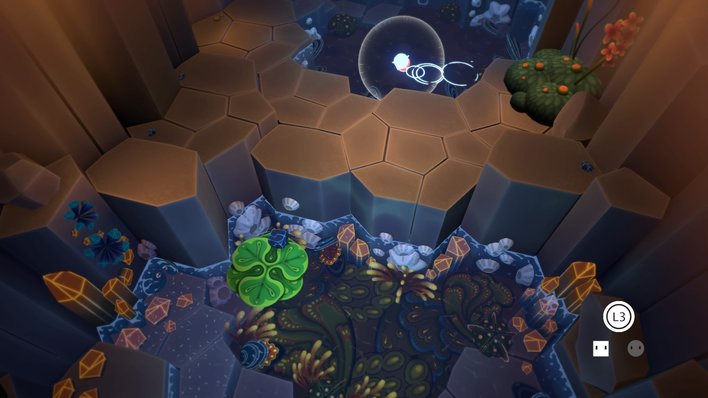 Should you ever get stuck, you'll likely stay stuck for a long time, as with some puzzles requiring incredibly obscure and complex solutions, and with there being absolutely nothing by the way of a hint system - even an optional one - a minor set back can turn into a game breaking headache. While the developers will probably paint it as some throwback to ye olde gaming days of yore, where you had to wait for a magazine to print a tutorial before being able to get any further, it still doesn't explain why there isn't at least an optional hint system.

It's sad, because we really had high hopes for Pode. It looked (and sounded) like the sort of game we ought to enjoy - even if at the back of our head, we were a bit worried that it might be a bit too indie. At a frankly insane £22.99 ($24.99), seemingly, our hunch was right. In that regard, maybe you can judge a book by its cover. If it looks too indie, it probably is.

quiz
How many Harry Potter characters can you name from their PS1 renditions?

On a scale of one to PS1 Hagrid, how confident are you feeling today?