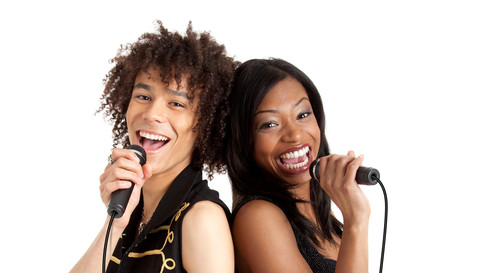 We Sing: Encore is the sequel to the best-selling We Sing, the first Wii karaoke game to do four players at once, and is a huge improvement over last years rather basic package. There's a whole host of new multiplayer modes, as well as a revamped single player - and they've even managed to squeeze another ten tracks on the disc, making a total of 40 songs (30 songs, plus 10 UK specific tracks), as opposed to the last game's 30.

As is always important for a karaoke game, We Sing: Encore has a great selection of tunes, and there's bound to be a few that even the biggest of stick-in-the-mud can't resist - and a fair few they'll at least know besides; there's oldies like The Supremes' "Baby Love", and Lynyrd Skynyrd's "Sweet Home Alabama", as well as new songs like "Fight For This Love" (Cheryl Cole) and Taio Cruz's "Break Your Heart". There's a fair amount of party cheese too, with The B-52s' "Love Shack" and Lou Bega's "Mambo No. 5" (which I thought I knew, until I realised I was actually singing the Bob the Builder version, singing about holes in roofs, mixing cements and various other, builder-y things). Even Baddiel and Skinner make an appearance in the football anthem "Three Lions".

You can sing each song in one of three different difficulty levels, where increasing the difficulty decreases the margin of error you have for each note, making it harder to hit the right note on higher difficulties. And hard is very hard - and that's coming from someone who sings on Rock Band on Expert with little problem. On top of this, each song is rated by difficulty, from one to five stars, with five being the hardest (I'm looking at you, Mika) and one being the easiest (you won't be break break, break break breaking your vocal chords with Taio Cruz). You can even make yourself a custom playlist with all your favourite songs in. 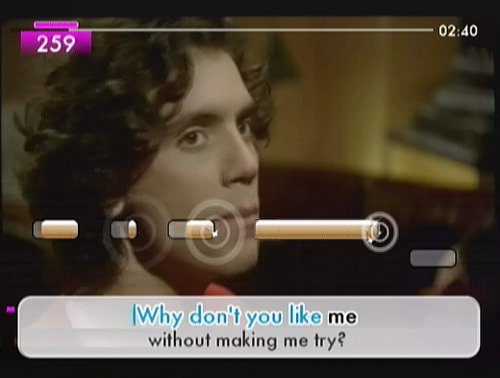 Why don't I like you? Well, maybe it's because your song's chuffing impossible to sing...

For the songs that have multiple vocal parts or singers - like in "Untouched" by the Veronicas, or "Don't Stop Movin'" by S Club 7, you can choose which part you'd rather sing - so in the case of S Club 7, you can either sing Bradley's part, or Jo and Rachael's - or, if you're feeling particularly androgynous, a mixture of the two. And don't worry if you think you sing a bit high to be Bradley - you can sing in whatever octave you want - as long as you're singing an A, for example, it doesn't matter what octave it's in, even if only dogs can here it.

We Sing: Encore has more modes than you can shake a microphone at (which, in fact, is how you let the game know you're ready to play a song), particularly when you play it in multiplayer, where you can choose from a whopping eight party modes, all of which accommodate up to four players.

First, there's 'We Sing', the standard, co-op singing mode, where you and up to three other friends can work together to get the best group score - but don't worry about letting everyone down if your vocal ability leaves much to be desired, because they'll never know, as this mode doesn't give you a break down of what each individual person scored, or show anyone's personal pitch bar - it only gives you the group score. 'Pass the Mic' is another co-op mode, where each singer takes it in turn singing sections to try to build up the best co-op score - but to make things interesting, the turns are random, so you never know who you need to pass it to till it happens.

'Versus' mode does exactly what it says on the tin, letting you go head to head against your friends to see who can get the highest score. 'Group Battle' is quite similar to versus, except people can split into teams (which don't necessarily have to be equal - if your Aunt Betty is an immense singer, three of you can all team up against her) to compete for the highest team score. 'First to X' lets you set an amount of points that everyone competes for, with the first person to reach it winning, while the 'Marathon' mode is another competitive mode, which lets you set up a playlist of songs, which the player with the best average score across all the songs wins.

And now come the 'interesting' (also known as chuffing evil) multiplayer modes. 'Blind' mode is a bit like versus mode, but with a few surprises up it's sleeve - at random points throughout the song, the lyrics and sound will disappear, leaving you on your own, with just the pitch bars to guide you. Whoever manages to get the best score on this mode wins. And if you thought blind mode sounds scary, wait till you hear about 'Expert' mode - which is the karaoke game mode from hell. Players compete for points by singing a song with no lyrics or pitch bars - this is a mode to try only if you know the song rather well, or if you're a karaoke masochist.

And also, maybe slightly confusingly, there's also the ability to sing duets hidden in the 'Solo' mode menu, where you can sing with a friend in co-op - either singing the same part or by each singing one part of a duet song (for example, one as each of the Veronicas in 'Untouched') in an attempt to get the high score.

The solo mode, by comparison, is quite small, with just three menu options. There's 'Sing' which simply lets you jump in and sing whatever song you fancy, as well as 'Lessons', to help out those of you that are less than confident about your singing ability. Seeing the relative scarcity of single player options, it seems a bit disappointing that a few of the multiplayer modes haven't made the leap to give you some more variation - specifically the 'Expert' and 'Blind' modes detailed above, which could have worked as well on your own as in multiplayer.

There's also the 'Awards' - which are an amazing idea, giving you something to work towards by yourself in what otherwise seems like a rather multiplayer-orientated game (which in itself isn't a bad thing). These are a set of 32 in-game objectives range from the easy "create your first playlist", "sing your first song" and "select your first random song", to the more advanced "get 9000 points on each song" (9000 is the maximum score you can get on easy), and "complete all singing lessons" (some of the later ones are impossible). There's also some totally random ones, with sometimes quite ambiguous descriptions - "pick the developers favourite background" and "create the special playlist" (whatever special might mean), as well as one entitled "No Style!", with a description of "choose the worst combination ever!" - we're not quite sure whether this is referring to colour schemes, songs or what.

And for times when you don't feel like singing, there's even a 'Jukebox' mode, which just lets you listen to the songs, and watch the music videos for each. We used this mode to try to work out how they got the effect on Jamiroquai's 'Virtual Insanity' video, after the loading screen told us that "In the video the floor is stationary and it is actually the scenery that is moving". We still haven't worked it out.

But despite being a very good game, We Sing: Encore isn't without problems. Occasionally, the next 'page' of a song can take you by surprise and scroll past before you've noticed - of course, the more you play a song and the better you know it, the less this will happen, but it can make it seem a tad unfair the first few times. Generally, it does display the next line below the line you're on, to give you a bit of advance warning, but sometimes you're left with a blank line, only for some lyrics to appear out of nowhere, when you're taking a breather.

Navigating the menus can also be difficult at times, as some of the 'buttons' seem rather small, or don't necessary look all that clickable (although the Wii Remote will rumble slightly as you move your cursor over them). Considering pointing with the Wii Remote can sometimes be a bit shaky and not all that precise (at least mine is, anyway), slightly bigger buttons would have helped.

Overall, We Sing: Encore is easily the best karaoke game on the Wii, with loads of modes (particularly for multiplayer), awards and songs to keep you going.

An all-round good karaoke game, that's easy to pick up and play, and has plenty to keep you coming back for more.

quiz
Personality Quiz: What kind of Fall Guys player are you?

Because right now that's all anyone seems to care about

Everyone was Te-eam Sonic Racing, try to keep your feet right on the ground