What is Dragon Quest Builders?

Dragon Quest Builders is a single-player build 'em up along the lines of Minecraft (only with a plot tying everything together), in which players spend their time rebuilding various towns and cities from the ground up, helping new residents with their requests as they go. Set in a world in which the evil Demonlord and his monster minions rule the roost, the story here is that humanity has lost it's ability to create, and has been scattered to the far corners of the kingdom. Sitting around staring at the razed ruins of their former homes, it falls to you, as the legendary builder, to help them rebuild their civilisation, and rid them of the Demonlord once and for all. 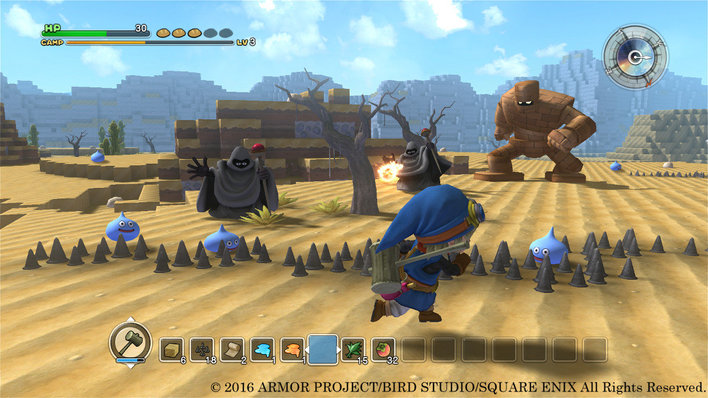 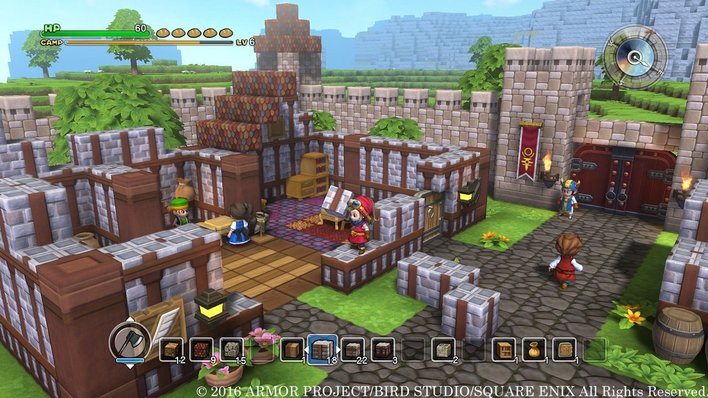 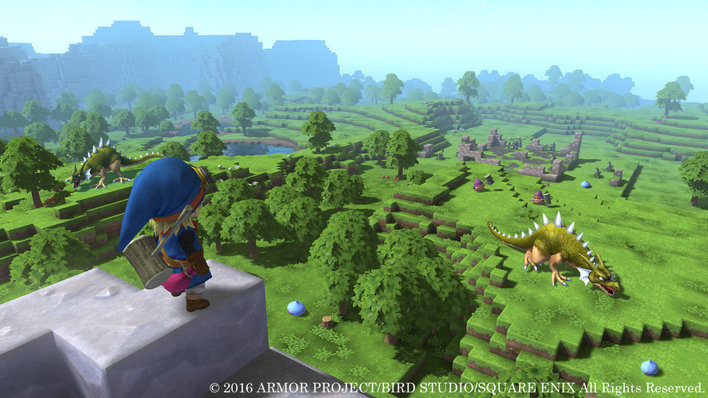 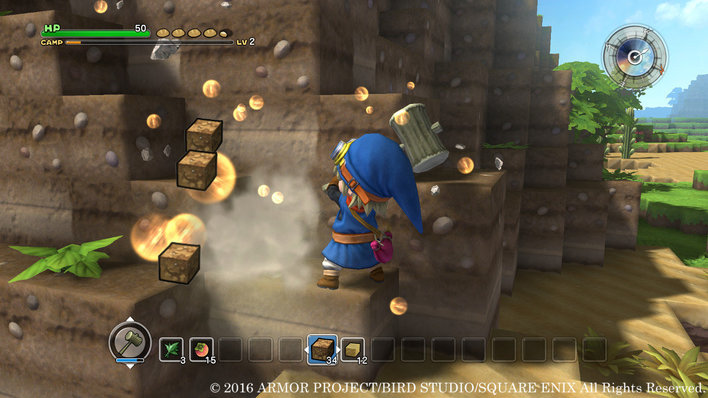 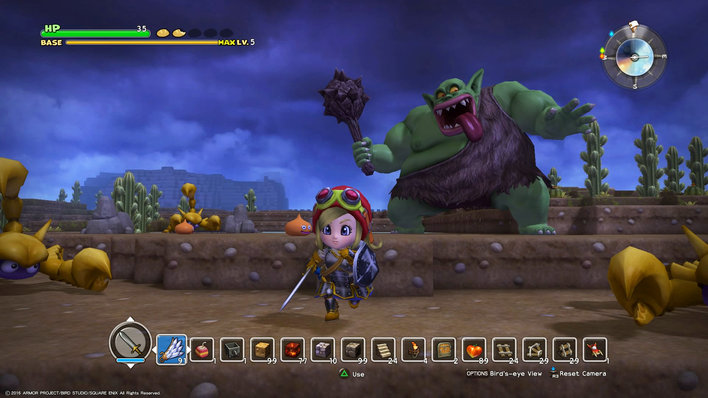 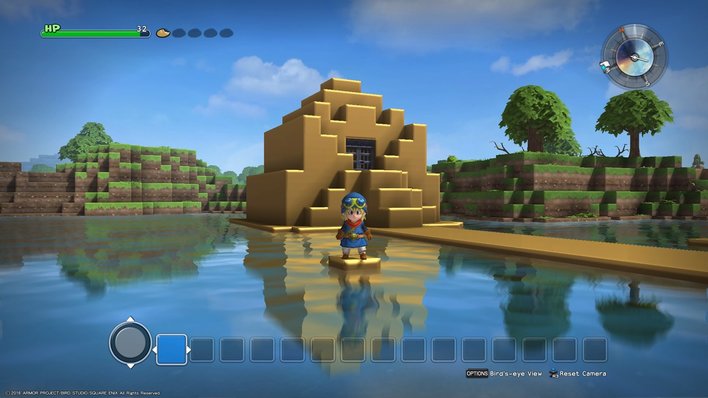 How do you play Dragon Quest Builders?

As you can probably guess from the title, Dragon Quest Builders is a game all about building - and the bulk of your time will be spent creating various houses, town defences and items for your citizens. By plonking down some stone blocks in a square shape, before adding a few doors, lights and pieces of furniture, you can create all kinds of different rooms for your townsfolk - and depending on the different 'recipe' you follow, you'll get buildings with specific purposes.

A room with two beds and a light forms a basic bedroom where folks can spend the night, while a room with a fire and a chest makes a crude kitchen, ready for your inhabitants to cook all kinds of food items. Sometimes you'll be given a specific 'blueprint' from a resident, which, when laid out on the floor, will show you exactly where to put things, while at other times you'll simply be given a vague verbal idea for a new room that's a bit more free-form and customisable.

But all this building requires materials, and that's your other main job as Builder - to go out into the surrounding wilderness, smash up rocks, chop down trees and fight with the local monsters in order to obtain the key components of your building materials.

Once your settlement reaches a certain critical size, you'll attract the attention of the monster forces, which you'll need to take on in simple button-mashing combat before you can proceed with the story. Ranging from a couple of weak skeletons, to several waves of gradually more difficult enemies, and even full on boss fights, defending your town is key to success, and you can build all kinds of defensive structures to help you keep the monsters at bay - such as the 'steel stockade', and four-block high steel doored stone wall, with a spiked floor and fire-breathing statues outside.

How easy is Dragon Quest Builders to pick up and play?

Overall, Dragon Quest Builders isn't too tricky to pick up and play. With simple controls, and an intuitive concept - building a house from blocks is both a lot of fun, and easy to get your head around - anyone who's played Minecraft before will instantly be at home here. Even if you haven't played Minecraft, it's still nice and easy to find your footing, with the first chapter essentially being one big tutorial, introducing you to the game's concepts.

In terms of challenge, perhaps the trickiest bit of Dragon Quest Builders is the combat. While overall, things are pretty simple - you simply mash triangle to attack - the lack of a dodge button does mean you'll have to be pretty nifty with an analogue stick to move out the way in time.

However, it's the boss fights that provide the biggest challenge. These epic clashes require much more of the player, often requiring you to have crafted specific items, and use specific strategies to defeat them. For example, the early Golem boss requires you to block both his boulder-throwing and spinning attacks with a portable wall (the Cantlin Sheild item), before laying highly explosive 'wrecking ball' bombs at his feet to damage him, all while trying to minimise damage to the city you've been lovingly building up for the past fifteen hours or so. This requires some quick reflexes, as you'll need to get into position, plonk down your shield, and then drop a bomb at his feet when he's stunned, before legging it lest you get caught in the explosion!

While in the main game, dying in battle will simply see you whisked back to base, no harm done, falling in a boss fight resets you back to before the battle took place. There is also a stamina system here, where you'll need to keep eating food that you find while out and about in order to stay "conscious" and moving. That said, the consequences for running out of stamina aren't too great - you'll simply be returned back to base, with a few less items in your pockets.

While in-game recipes will tell you what you'll need to gather in order to build a room, or craft an item, there's no indication of where you need to go to find the required bits and pieces - instead, it's up to you to explore, experiment, and make a mental note of where you can find Blue Goo (from Slimes), or White Petals (from white flowers) for yourself!

For the youngest of players, a strong reading ability is a requirement here. Totally unvoiced, you'll need to be able to read not only to make sense of the recipe instructions, but also to find out what you're meant to be doing in each quest, or what's happening story-wise.

On the whole, Dragon Quest Builders is a pretty tame game - there's no bloody violence, no sexual content and no real bad language to speak of (as strong as it gets is the occasional use of the words damn and hell).

In battle, players use hammers, swords and bombs to defeat cartoon slime balls, skeletal warriors and giant stone golems, with attacks accompanied by slashing sounds and bright flashes of light. Enemies simply fall apart (if they're skeletons), or fade away when defeated. There's no gore to speak of, although one enemy, a 'Bloody Hand' is a severed hand covered in a reddish slime.

Occasional mildly suggestive text appears, such as the item description for the 'Scandalous Swimwear' ("racy red swimwear for those who like to show some skin"), while a female Cantlin resident asks if, "When night falls, do the two of you retire to the same room to spend some special time together.", with regards to the player and another female resident.

Get Dragon Quest Builders from

quiz
How many video game-related Star Wars ships can you name?

Whether they were made specifically for games, or just appeared there before the films, how many of these gaming Star Wars spacecraft can you identify?

quiz
Can you guess the classic Tomb Raider game only by Lara's butt?

It may not be her most famous asset, but how much attention were you paying to Ms Croft's early outings?

A dark and dangerous case of missing persons, the occult and giant sea monsters

One of the greatest games of all time - and its sequel - are reborn for another generation. Here's where you can find those sailors.