Dragon Quest XI: Echoes of an Elusive Age Review - The slime of my life

It's that time of year again, where every single new game in the entire known universe decides to release in the space of a couple of weeks of each other. But for all the brand new, never-before-seen titles, sometimes it's nice to go back to an old faithful - a series where you know exactly what you're getting into from the off. Much like the enduring Pokemon series (at least, up until Let's Go), the Dragon Quest games have made their living from staying mostly the same, iteration after iteration. Newcomer Dragon Quest XI: Echoes of an Elusive Age may very much stay true to the whole 'if it ain't broke, don't fix it' adage, then - but that's just the way we like it, as this is an RPG that's given us the most fun we've had with a game in ages. 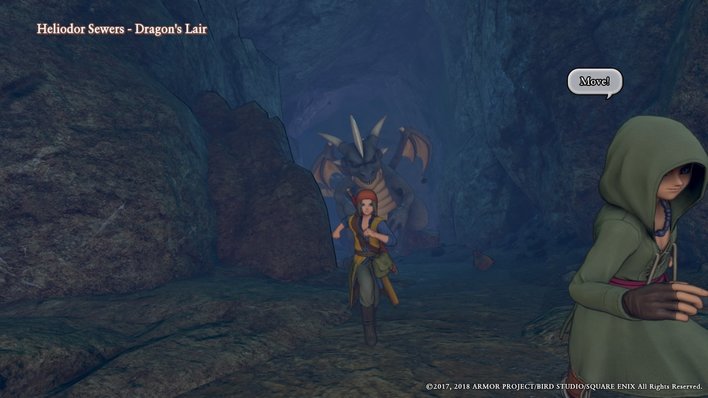 We're moving as fast as our limited analogue stick skills will carry us!

Set in the sprawling world of Erdrea, Dragon Quest XI sees you playing as a mute guy with a gnarly mark on his hand, which apparently makes him the reincarnation of a being known as the 'Luminary', a saviour that once saved the kingdom from destruction. Having been raised in a backwater village by his adoptive parents, he sets off to go and meet with the king of Heliodor, only to find a less than friendly welcome waiting, as the he promptly gets locked up in a dungeon, and declared the 'darkspawn', a 'harbinger of calamity' and enemy of the state. In the meantime, a nefarious being known as the Dark One has coincidentally been readying his monster army, ready to take over the world. And so it falls to the Luminary, and the rag tag band of adventurers he gains over the course of his travels, to try and save the world once more, as per the prophecies.

It may not be the most original of plots, but in practice, this means you'll spend most of your time travelling from town to town and from dungeon to dungeon, helping out the locals as you search for information to aid you in your quest. There's missing treasures to find, kidnappings to foil and a hapless prince to escort on the battlefield - and that's just in the opening twenty hours or so. Outside of the towns, there's forests to explore, mountains to climb and dungeons to crawl, all littered with hidden secrets and treasures, just waiting to be plundered. Dragon Quest XI doesn't try to reinvent the wheel in any way, shape or form - but it's very much more of the same game we've come to know and love. 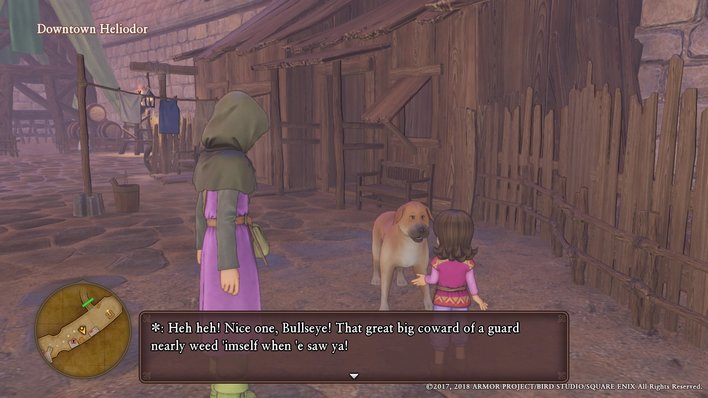 You can use Bullseye to your advantage when it comes to sneaking past said guard, too.

In the role-playing game sphere, traditional turn-based battles have fallen out of favour a little, in favour of more fast-paced, button-mashing real-time affairs - but not so with Dragon Quest XI. Enemies wonder the map as you explore, and running into one will trigger a battle, where you, your party members and your opponents take it in turns to attack, defend and sling spells until they're all defeated. Different characters have different strengths and weaknesses, with some excelling at dealing damage, others at messing with enemies' statuses, while others still specialise in healing - likewise for the enemies you'll encounter - so you'll need to think about your strategies in battle, particularly when facing off against big bosses. When exploring the obligatory dungeons, you'll also come across mysterious glowing enemies that, when defeated, can be ridden around the dungeons themselves, giving you powers to climb walls, jump high or even fly - and these abilities are often an important part of navigating the dungeon in question. 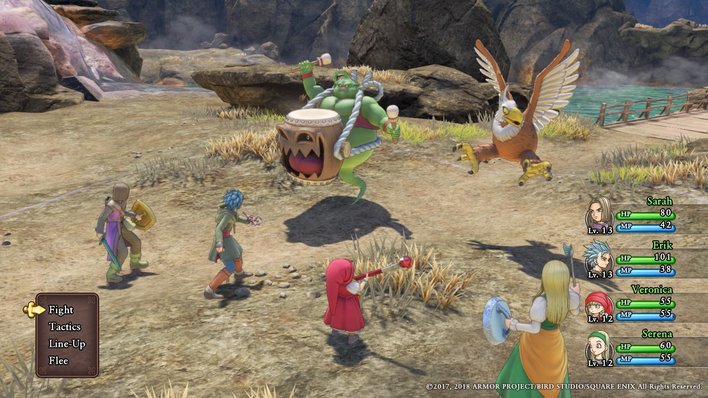 On the default setting, your AI companions will make their own moves, but you can choose to take over instead via the Tactics menu.

Like its predecessors, Dragon Quest XI's pun game is strong. From the vase-loving boss Jarvis, who was hoping to urn the respect of the Lord of Shadows until you came along and everything went to pot, to the annual desert horse race, the Sand National, it seems like everything's game for a good joke in Dragon Quest XI - and that's not even including the many, many sigh-worthy monster names out there, CruelCumbers, crazy crustacean Crabber Dabber Doos and the umbrella-shaped Brollygaggers to name but a few. Each town you visit seems to have their own accent or way of speaking too, from Somerset farmer-style accents and the obligatory Scottish folk, to a Japanese-inspired town who talk entirely in haikus - and each new locale looks decidedly different too. The localisation effort is really on point, and while the game's not completely voice acted, it's a refreshing change from the Japanese voices only you get in so many role-playing games these days. 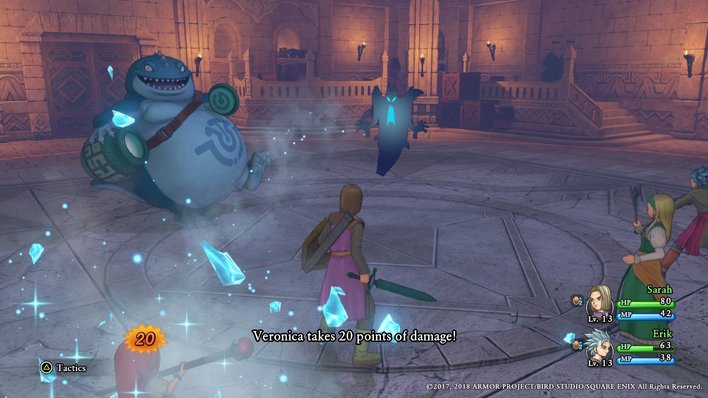 Urn-fortunately, we soon put a lid on Jarvis' plans, as he shattered under our onslaught...

But the real highlight of the game is probably the party you're travelling with - an unusual band of misfits who help make the journey across Erdrea much more fun. There's Erik, the quick-thinking rogue who helped you break out of prison; the Great Sylvando, a fabulously camp circus performer; the unlikely duo of arse-kicking princess Jade, and elderly-dude-with-a-backpack, Rab; and even a pair of magical twins, Serena and Veronica, the latter of which has the appearance of a child, following a run-in with some ruffians that mysteriously de-aged her. There's plenty of banter along the way, and plenty of funny moments to lighten up your quests, whether it's Rab's risqué choice of reading material or snarky Veronica's many, many comebacks.

No prizes for guessing how that 'whoopsie' happened...

The world of Erdrea is perhaps a bit less spread out than some previous Dragon Quest games, letting you cut down on a lot of needless traipsing around a mostly empty map - and when you do explore, you'll often be rewarded with treasure chests and other tidbits too. These then tie into the 'Fun-Size Forge', which is probably the best way of keeping your party outfitted with the equipment they'll need to keep pace with the increasingly stronger monsters you'll run into on your quest. Especially as you'll likely find, particularly in the early days, you don't have enough disposable income to buy everyone new stuff at every new place you visit. 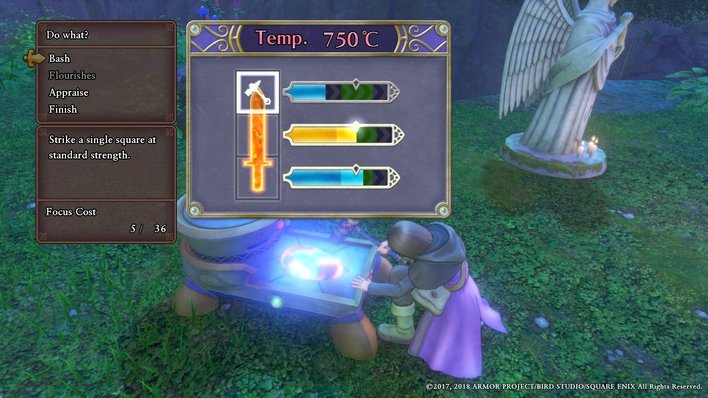 The closer you can get the bar to the mark, the better your piece of equipment will turn out.

In fact, the only real downside is that, as with many of the previous Dragon Quest games, you may find yourself having to grind at times, heading out into the wilderness and needlessly slaughtering hundreds of slimes in an effort to raise your level enough that you can tackle a tricky boss later. As simple and addictive as the battle system is, it can feel like a bit of a drag when you're forced to repeatedly fight the same enemy hundreds of times over for an elusive rare dropped item, either for an optional side quest, or in order to craft yourself a better weapon.

Still, it does little to put a damper on Dragon Quest XI: Echoes of an Elusive Age, which brings everything we've known and loved about the series to the bigger screen, for the first non-handheld entry in over a decade. If old-school role-playing games with a winning sense of humour and wall-to-wall puns are your cup of tea, then you owe it to yourself to pick up Dragon Quest XI, which squeezes in hundreds of hours of slime-tastic fun onto a single disc.

Goo-reat!
Get Dragon Quest XI: Echoes of an Elusive Age from

Review
LEGO DC Super-Villains Review: Back in Bad
Review
Call of Cthulhu Review - So long and thanks for all the fish

quiz
Can you name the PS2 RPG from the screenshot?

Do you know your Final Fantasies from your Kingdom Hearts? There's only one way to find out!

quiz
Quiz: Who's That Digimon?

How well do you know your Digimon? Take this quiz to find out!

quiz
Quiz: How many Skylanders can you name?

Test your Skylanders knowledge with this character quiz!

quiz
How much can you remember about the Paper Mario series?

To celebrate the launch of Paper Mario: The Origami King, why not test your knowledge with a quiz?