Is there a better way to ring in the festive season than sitting back with an engrossing Pokemon adventure, as you 'gotta catch 'em all' while you recover from your 'gotta eat 'em all' Christmas feasts? If there is, we've yet to find it - and no-one knows this better than Nintendo, who've been releasing a Pokemon game pretty much every year for the past two decades, with the most recent instalments hitting the 3DS just in time for present giving season. 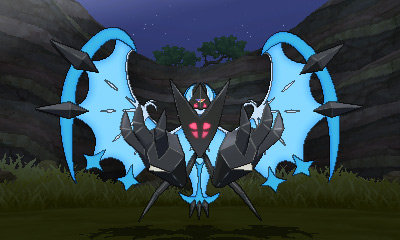 Version-specific legendaries Lunala (pictured) and Solgaleo have also been given a new lick of paint.

This most recent instalment, Pokemon Ultra Sun and Ultra Moon, isn't an all new adventure, but is rather a kind of upgraded version of last year's Sun and Moon. On the Hawaiian-inspired Alola islands, a tropical paradise for Pokemon and people alike, you hop into the running shoes of the traditional 11 year old kid, who's about to embark on their own Pokemon adventure. However, on the remote collection of islands, they do things a little differently, and wannabe Pokemon trainers will need to work their way through each of the four 'Island Challenges' before they can be crowned champion.

Each island is home to a number of different challenges, which range from simple battling, to finding particular items, or testing your knowledge in a quiz of sorts, eventually culminating in the Grand Trial - a fight against the island's Kahuna, a strong Pokemon trainer and leader of sorts. It's a nice change of pace from the usual Gym Badge run of previous Pokemon entries, while still giving you something to work towards during the course of your Pokemon journey - but it's also one that's almost exactly the same as it was in Pokemon Sun and Moon.

Ultra Sun and Ultra Moon are essentially this generations' Yellow, Emerald or Diamond - they aren't true sequels, just enhanced versions of what went before. Rather than crafting a whole new story as they did with Black 2 and White 2 on the humble DS, they've mostly just tucked in a few more tidbits along the way, as well as a handful of new features and new Pokemon to catch. Almost everything about the original Sun and Moon remains the same, especially in the first half of the game, with the new bits and pieces only really hitting in the late/post game, when the new antagonists start to come into their own, with their own agenda and Legendary 'mons to catch.

You still have the same choice of starters though.

However, it's a fairly minor tweak to the tried and tested Pokemon formula Nintendo have been using for decades, with Ultra Sun and Ultra Moon still basically just an excuse for a Pokemon-catching jaunt across the country. In case you've somehow missed out on the phenomenon, the whole idea here is that you set out on a 'gotta catch 'em all' journey, as you travel from town to town and island to island, taking in forests, caves and beaches along the way. From the moment you get your first Pokemon gifted to you by the island's Pokemon Professor, you'll be battling many a wild beastie in Pokemon's trademark simple turn-based battles, taking it in turns with your opponent to deal damage. Having weakened said wild Pokemon sufficiently, you can throw a Pokeball at it to try and catch it, adding it to your team to help you out in subsequent battles. Building up a strong and varied team is part of Pokemon's addictive hook, as different creatures have different types, attacks, strengths and weaknesses that require you to keep a range of them with you to cover every eventuality.

Pokemon Sun and Moon - and by association, Pokemon Ultra Sun and Ultra Moon - do put a bit of a new spin on some of their battles, too. In the trials leading up to your Grand Trial battle, you'll find yourself coming face to face with a powerful creature known as the Totem Pokemon, in Sun/Moon's newest gimmick, SOS Battles. Generally the climax to one of your trials, these Totem Pokemon are essentially a stronger (and often evolved) version of the bog standard 'mons you'll have been fighting earlier in the trial, enveloped in a stat-boosting aura that makes them even more formidable. They're also able to call for allies to help out, joining the battle part way through, and bolstering the enemy side, making them even more of a challenge to take out. SOS Battles can take place outside of trials too, with some wild Pokemon also able to call on their allies for help, which can actually be used as a handy way of luring out some of the more hard to find 'mons for your collection (for example, Pikachu only appears when called).

There's also collectable Totem stickers scattered around, which let you catch your own Totem Pokemon.

There's a few new distractions thrown in for Ultra Sun and Ultra Moon too - most notably the Alola Photo Club, which lets you snap fun pictures with your Pokemon pals during your journey and decorate them with various stickers and frames. There's also Mantine Surf - a fun little mini-game that lets you hop on the back of the aforementioned Mantine and catch some waves, pulling off some crazy tricks along the way with various button combinations, aiming for a high score. A bit like a more Pokemon-centric Tony Hawks-on-water, successful surfing outings will reward you with 'Beach Points', which can be pooled with your 'Battle Points' from competitive Pokemon battle tournaments to purchase various items, like Rare Candies, PP Ups and other such nifty bits. 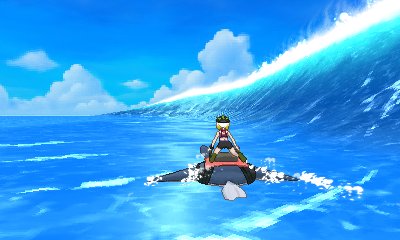 Mantine Surf is a fairly fun distraction, at least.

But arguably the biggest new addition for the Ultra games comes towards the end of the game. Throughout the story, a new set of futuristic antagonists will pop up from time to time - the Ultra Recon Squad - who have come from a different dimension in search of a Legendary Pokemon (as always). Different dimensions becomes a bit of a theme later on in the story too, and Pokemon Ultra Sun and Ultra Moon have new Ultra Wormholes you can hop through in search of super rare legendary 'mons (including those from past games) and a handful of regular Pokemon that weren't available in the original games, such as Audino, Altaria and Quagsire to name but a few.

We don't want to make Pokemon Ultra Sun and Ultra Moon sound like brand new games though, because they really aren't - the world and story is largely the same, just with a few extra Ultra Recon Squad scenes thrown in, a few more Pokemon to catch and a couple of cursory mini-games. Unless you're a Pokemon fanatic, those who've already played their way through the original Sun and Moon games will likely find it too close for comfort, however, there's no doubt that, if you've yet to pick up the original games, then these 'Ultra' versions are the ones to go for, as they do go that little bit further.

quiz
Can you get 100% on the Toughest FIFA Quiz in the World?