Do a barrell roll in this tongue in cheek sci-fi shooter.

Sometimes, you have to wonder what games developers are on when they come up with ideas for games. You can imagine how the conversation went. "Hey guys, you know what would be great? We'll make a sci-fi themed shooter. You're playing as an upcoming young hero, who flies in memory of his father - a war hero who was lost in battle - and you're up against a megalomaniac who's trying to rule the galaxy. It'll be an epic tale of courage, of good versus evil, of our hero coming of age." "Well Jenkins, it's a good idea, but I think it's missing something... Any suggestions? Wilkinson?" "Maybe it needs more monkeys?" "Monkeys??? Ah - now we're getting somewhere. But I don't like monkeys. One pulled the aerial off my car's roof in the Safari park the once. They're destructive little devils, so they'll have to be the bad guys. Jenkins, you're a genius - we'll run with your idea, but we'll change it a little - rather than playing some boring young hero, you'll be playing as... a Fox! How great does that sound! Now he needs some wingmen. How about a hare, an annoying toad, and a falcon! Man, I'm a genius" "But, but Sir - falcons don't even have arms... How can they fly a ship?"

They can run on their hind legs too. And wear clothes. And, in Slippy the Toad's case, a hat.

If you're new to the world of Nintendo games, the chances are StarFox 64 may be something of an unknown - but to the world of the internet, it's become something of a legend in itself, thanks to how utterly daft it can be. A space-themed shooter, StarFox 64 takes an otherwise serious genre and adds a typical Nintendo flair, where rather than playing as people, you're playing as animals. In spaceships. Shooting down other animals, in space ships, who bad mouth you in the most ridiculous of ways. With every end of level boss sounding more pantomime villain than genuine evil genius, StarFox 64 has its tongue so firmly in its cheek, it'd probably struggle speaking - and that's part of what makes it so appealing.

StarFox 64 3D is an on-the-rails shooter, with the game guiding you through each of the intricately detailed levels on a set course, giving you only a minimal amount of freedom in where your ship goes. This being a 3DS game, there's also the option to pilot your ship using either the Circle Pad, or by tilting the whole system, letting the console's gyroscopes do the work for you. With plenty of obstacles in each level though, it's not like you can just sit back and let the game fly for you - there's buildings and bridges to dodge, enemies that'll fly into you if you don't move out of their way, and, of course, plenty of bad guys to blow up. From tiny ships, to larger robots who topple buildings in front of you, to the countless tanks that trundle along below you taking pot shots, there's a huge variety of enemies out to get you, simply for being the humanoid, space ship flying fox that you are. 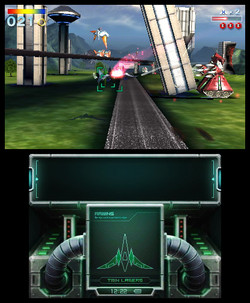 Look out! You're going to get squished!

Bar dodging their fire though, there's plenty of ways to ensure you survive until the end of the level. Firstly, hidden in each level are a number of silver and golden rings. Seeking them out by destroying things - whether you're blowing the doors off a building before swooping through, or simply taking out an entire squadron of enemies, the rings help massage your health, with the silver ones replenishing your gauge, while the gold expand your meter when you've collected three of them.

Unlike many other shooters though, StarFox doesn't fame itself on its difficulty. It's certainly a challenge, but it's a challenge that tailors itself to your skill, while encouraging you to improve. On completing each level, you'll be presented with the galaxy map, where each planet represents a different level, and are divided into three streams, with the top being the hardest, and the bottom being the easiest. Depending on how well you've done in the last level (sometimes the number of ships you've destroyed/lives lost, but more often based on achieving something challenging in the level - like taking out each searchlight before you get spotted), you'll either move up or down the difficulty tiers for your next level. Do well, and you'll be moving into the hard levels, but barely scrape through, and you'll be stuck at the bottom.

Each level ends with a boss fight, against what, as we mentioned before, is essentially a pantomime villain in a spaceship, hurling awful insults at you "You're not as stupid as you look", whilst basically doing a terrible job of trying to destroy you. Usually some form of giant robotic something-or-other, these bosses always have a weak point that you need to target - although sometimes it's not really as obvious as it should be. Although you can usually guess what you need to do through intuition and listening to the comments of your wisecracking team mates, occasionally, you'll find yourself just shooting at everything, with everything you've got, until something flashes red.

If anything though, StarFox 64 3D is actually less cheesy this time around - which is a shame, because it's part of what made the game so much fun. Famed for its awful, and somewhat cheesy voice acting, Nintendo have seen fit to re-record every line of dialogue in the game, with the end result being something that's not as good for people who've played the original, and something that's lost its charm for newcomers. It's actually strange how much it affects the game, as, apparently, the awful voice acting was a much larger part of the game's charm than we realised - even if we did spend most of our childhood quoting it. 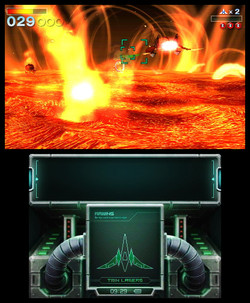 Even though they're few in number, there's still plenty of variety to the levels - from arctic tundra, to, well, this lava level. We just wish there were more of them

With seven levels to play through in order to finish the story, you can finish the game within an hour in one sitting - even if you won't have seen everything the game has to offer. But this is actually the biggest problem with StarFox 64 3D. It's a great game - while it lasts - but once you've finished it, there's next to nothing to do. If you're good, you'll be able to see and do almost everything that game has to offer within three hours - and if you're not so good, you won't actually be able to see it all anyway, as you'll be confined to the "easy" path. Outside the main story mode, there's the "Score Attack" mode, which asks you to get a certain number of kills during a run through a level, giving you a Bronze, Silver, or Gold depending on how  well you do, but getting a Gold is so insanely hard, it's something only the top 0.1% will ever be able to manage - meaning there's not really that much left for the rest of us. Even just adding some achievements, that you could unlock for achieving special little things in levels would have added so much extra incentive to keep playing the game, and would have been relatively easy to do, yet seemingly once again, Nintendo have seen fit to release a game that's perfectly formed, but far, far too short - just like Steel Diver.

The only other mode that attempts to add some replayability to the game is the included multiplayer mode, which, happily, has full support for single card download play, letting up to four people play along together, even if only one of them has the cartridge - but sadly, there's not really enough here to keep you going either. With only one mode on offer, and no support for online play, StarFox 64 3D's multiplayer mode is rather limited. It's actually surprising that this doesn't have online support, as the multiplayer mode actually uses the 3DS's camera as a video camera, to capture footage of your reactions should you get shot down - which would be much more useful were your opponents not sitting directly in front of you.

While it isn't quite as short as Steel Diver, StarFox 64 3D is still crying out for something more to keep you coming back - even an online, or StreetPass leaderboard would have helped, as it would have added that extra incentive that score based games so desperately need. Knowing your friend had topped your score could have been all it'd take for you to delve back into the game. Instead, by trying to stay so close to what the game was like originally, Nintendo have released a game that feels like it ends far too soon. It's fun while it lasts - and it's certainly one of the most visually impressive titles on the 3DS - but if you're looking for a game that'll last, no matter how inventive, or madcap it is, you'll want to look elsewhere.

Perfectly formed, but far too short.
Get StarFox 64 3D from

The age old shooter gets a motion-control enhanced sequel - but has the format stood the test of time?

Genre(s): Shooter (On the rails)
Platform(s): Wii U

news
Star Fox Zero has an invincibility mode, to help kids and novices jump in

Genre(s): Shooter (On the rails)
Platform(s): Wii U

news
A new Paper Mario heads to Wii U, Star Fox Zero gets a release date, and #FE is on its way

It's our Wii U Nintendo Direct March round-up

What age is StarFox 64 3D (Nintendo 3DS) appropriate for? Here's our plain English guide to what the game's all about.

Space shooter reimagining out in September