Theatrhythm Final Fantasy: Curtain Call is a musical rhythm action game packed with tunes taken from the Final Fantasy series of role-playing games. Players simply tap, swipe and hold their stylus on the Touch Screen in time with the icons that move across the screen, scoring points as you go. While you will be penalised for missed or poor reactions, and it is possible to fail a song, there are three different difficulties to choose from, so most should be able to find one they're comfortable with. Younger kids may well not have the same sense of nostalgia for the Final Fantasy games, or even recognise the songs, but that doesn't mean they won't be able to handle things. 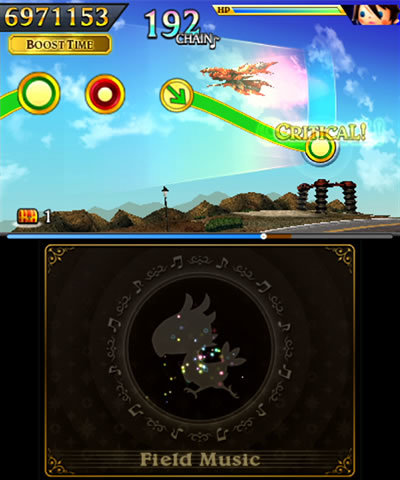 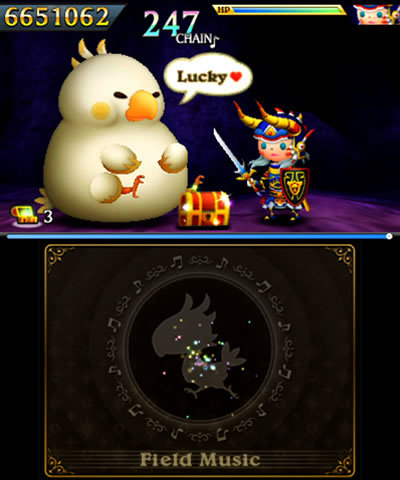 There's little reading involved, no knowledge of the series is required, the songs are good enough that anyone can appreciate them, and most of the game is fairly self-explanatory, once they get over the initial hurdle of learning what to do. It is a game that relies on fairly fast reactions though, so those kids who prefer a more laid-back title may not hit it off. But for those that do, the huge amount of songs to complete and extras to unlock could keep them entertained for a while. The semi-role-playing sections, such as the Quest Medley mode (where you travel though a 'dungeon' filled with sequential song stages) and the party management (equipping items, setting abilities and such) may go a little over younger player's heads, but most of the complex bits are optional extras that are irrelevant to the bigger picture, and shouldn't hamper their enjoyment - or even ability - to play the game. If your little ones fancy some toe-tapping, stylus swiping fun, this is a good pick.

Being a music game, there's nothing particularly untoward in Theatrhythm Final Fantasy: Curtain Call. There's nothing at all questionable in what you're doing - simply tapping, swiping and holding symbols on the Touch Screen in time with the music - where the potentially questionable parts come in is in the scenes that play in the background during some songs, which show your cartoon-like characters bashing similarly cartoon fantastical creatures with swords, magic missiles and guns. Occasional scenes show a character impaled by a lance, blood on the ground and characters shot with arrows or guns - but they're largely infrequent and you'll likely be paying more attention to the notes on screen than the cut scenes. Nothing ever gets that gory, and there's no sex or swearing, so parents don't have too much to worry about here.

Oodles of story-driven titles hitting the West this year, for both Playstation 4 and PS Vita

It'll take more than a kick, punch to beat this tricky rhythm game

Here's our pick of the very best games of 2016 per age group, with something for the whole family!