If you aren't a fan of dungeon crawlers, the chances are *puts on hipster glasses* you may not have heard of the Shin Megami Tensei series - a niche collection of demon-filled Japanese role-playing games, which, while popular in their native Japan, haven't really enjoyed quite the same commercial success in the West. It's one of those games we've always been kind-of interested in, but have been a bit nervous about truly taking the plunge with, thanks to its reputation for being very, very hard - a reputation which we found was well deserved the hard way. Enter Shin Megami Tensei IV for the 3DS, the first main entry in the series for about ten years, the first Shin Megami Tensei game we've ever played - and a very tough game to boot.

Set in the feudal Japan themed land of Mikado, you play as a character named 'Flynn' by default, who's recently been inducted into a samurai organisation, tasked with keeping the world's demons in check. A traditional world of castles, knights and samurais, after a recent unrest, in which a being known as the 'Black Samurai' spread its satanic messages and converted people into demons, it's up to you and your three companions - boring Isabeau, friendly Jonathon and snooty Walter - to head off in search of her, into the winding caverns below the town, and bring her to justice. But what starts out as a routine demon catching mission (if there is such a thing) soon takes a turn for the weird, as you come to find yourself in a post-apocalyptic version of Tokyo, kind of like Futurama's New New York. Suddenly that high tech gauntlet each samurai wears seems a little less out of place - and the story descends into the staple Shin Megami Tensei story of warring factions, supernatural forces and morality. 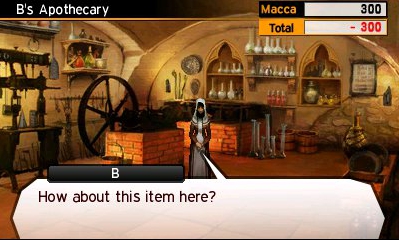 These samurai naming conventions remind us of James Bond.

Shin Megami Tensei IV is essentially a dungeon crawling role-playing game, which sees you exploring the twisty turny (and rather drab) environments, battling all manner of fantastical and demon-like beasts in traditional turn based encounters. In a way, it's a little bit like Pokémon - albeit a much darker, creepier Pokemon - with a menagerie of cuddly, bizarre and often terrifying demons, each with their own distinct personalities, for you to capture, collect and train. Unfortunately for you, you can't just force yourself upon these demons like you can a Pokemon, and catch them in a ball - instead, their services have to be earnt, and that usually means negotiating with them, or outright bribing them with gifts of items or Macca (the game's currency) before they'll agree to sign up. In another awkward twist, it's important to remember that these are demons - just because they say they'll join you after you give them 23 Macca doesn't mean they actually will. It's something that doesn't really jive too well with our naïve nature, as all too often we'd find some manipulative demon taking all our items and money, then running off - or one-hit-killing us in return, when we only wanted to be friends.

Easily the best part of the game is the demon fusion, which should already be familiar to fans of both the Shin Megami Tensei and Persona series (although in the latter it takes the form of Persona fusion). Basically, the demons you recruit can then be fused into bigger, better and badder demons, by combining two or three existing ones via some Frankenstein-like forbidden ritual - and it's quite fun seeing how they'll all turn out, in much the same way as the Pokemon's whole 'gotta catch em all' proviso. And given Shin Megami Tensei IV's insane difficulty curve, you'll need to start fusing as soon as you can, to help give you a bit of an edge in battle.

And an edge in battle you'll really need, because Shin Megami Tensei IV is hard with a capital 'h' - expect plenty of random difficulty spikes, cheap one-shot deaths and some rather annoying status effects. Battles are turn-based, with you and your allies taking it in turns with the enemies to attack, heal or use magic/special moves. In the top left hand corner, a number of green icons show how many actions you have to play with for your turn - by attacking enemies with elements they're weak to, you'll nab yourself an extra go, whereas missing an attack, or hitting a bad guy with something they block completely, will cost more icons than normal, cutting your turn short. Taking advantage of enemies' weaknesses becomes the key to winning, especially when faced with demons who are perfectly capable of taking your health down from full to zero in a single swipe. 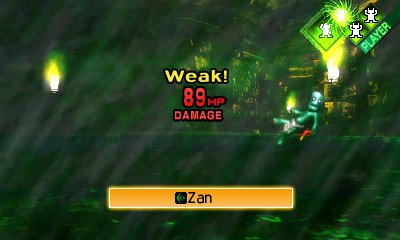 The little green icons in the corner denote how many turns you can take before the enemy.

But, assuming you manage to survive each battle, you and your demon troupe will be rewarded with experience points, and amassing enough will see you gain a level, learning new moves and abilities as you go. For each level your main character gains, you'll get a number of points to spend on increasing your strength, dexterity, magic, agility and luck, each of which govern different attributes - although with no guidance as to what would be a 'good' way of distributing them, we just stuck to adding one point to every stat each time.

Levelling up also earns you 'app points', which can be used to upgrade your helpful AI companion, Burroughs, who lives in the computerised gauntlet on your arm. Burroughs comes with her very own app store, which lets you purchase all sorts of helpful upgrades - some are fairly compulsory to the whole Shin Megami Tensei experience, such as 'Scout' to let you converse with and recruit demons, 'Mido' the demon fusion AI/app, and 'Mapper' which gives you a handy map of the area. Others are more optional, although still pretty useful, expanding the number of special moves you and your demons can know at once, increasing the number of demons you can have in your party at once or letting you negotiate a cease fire with an attacking demon.

While useful because she can heal, Napaea was a bit of a pain to win over.

The problem is Shin Megami Tensei IV can feel way too difficult, unfair and random for its own good. All too often enemies are capable of wiping you and your entire party out in one hit, even on the game's supposedly easy difficulty, and the conversations with demons feel more like luck than skill. We found ourselves diddled out of more and more money and items as we tried to win over various demons - only to have them turn around and lash out at us in return. Trying to decide whether some bearded turkey man would rather visit a battlefield, a graveyard or the mountains may sound funny on paper - but when you invariably pick the wrong one each and every time, it gets very irritating very quickly.

Players used to the quirky teen drama of the Persona series will be disappointed too, as Flynn and the gang seem very one dimensional by comparison, and nowhere near as talkative. Occasional conversations help break up the game's monotonous grind for levels, demons and items, but they're all too forgettable to really write home about. In fact, your companions - Isabeau, Julian and Walter - really only exist to fill the appropriate neutral, law and chaos options and determine which ending you'll get.

Shin Megami Tensei IV is the sort of game that'll probably hit all the right buttons for existing fans of the series, but its punishing difficulty and the randomness of monster recruitment are likely to put off any newcomers. For them, Persona brings all the fun of demon fusion, with a much more likeable cast of characters and a better story - and, most importantly, without all the gruelling, grinding-induced headaches. Shin Megami Tensei IV isn't a terrible game - but it's not that great either, and we really expected a lot more from a series that spawned the Persona games.

One for the fans
Get Shin Megami Tensei IV from